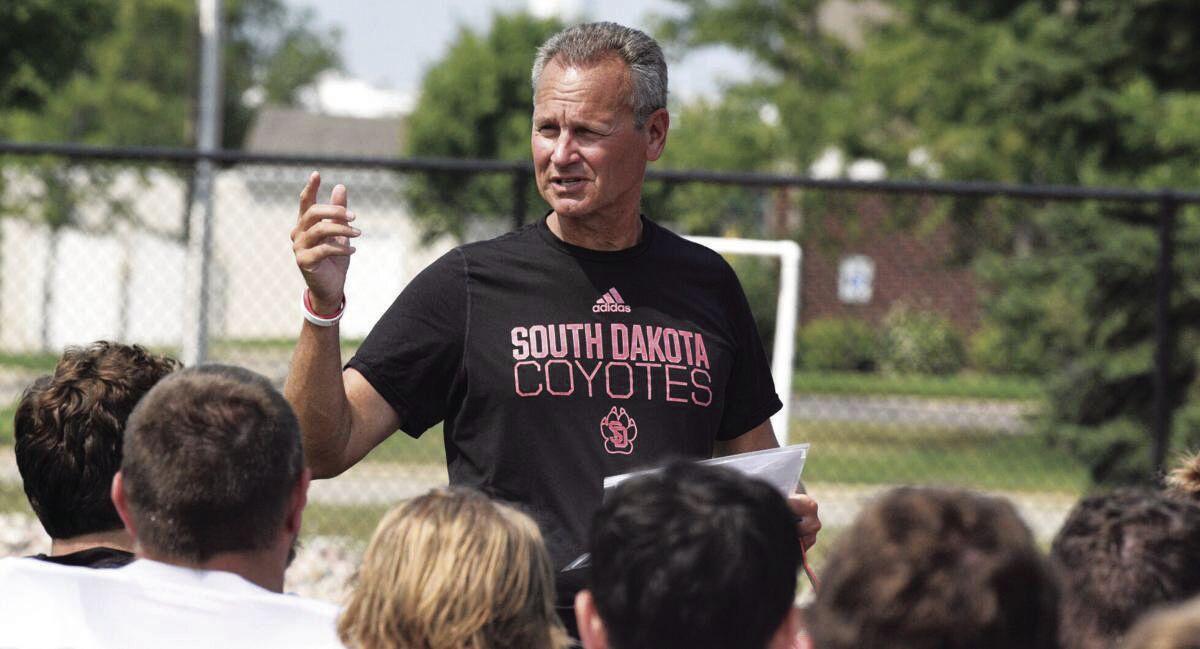 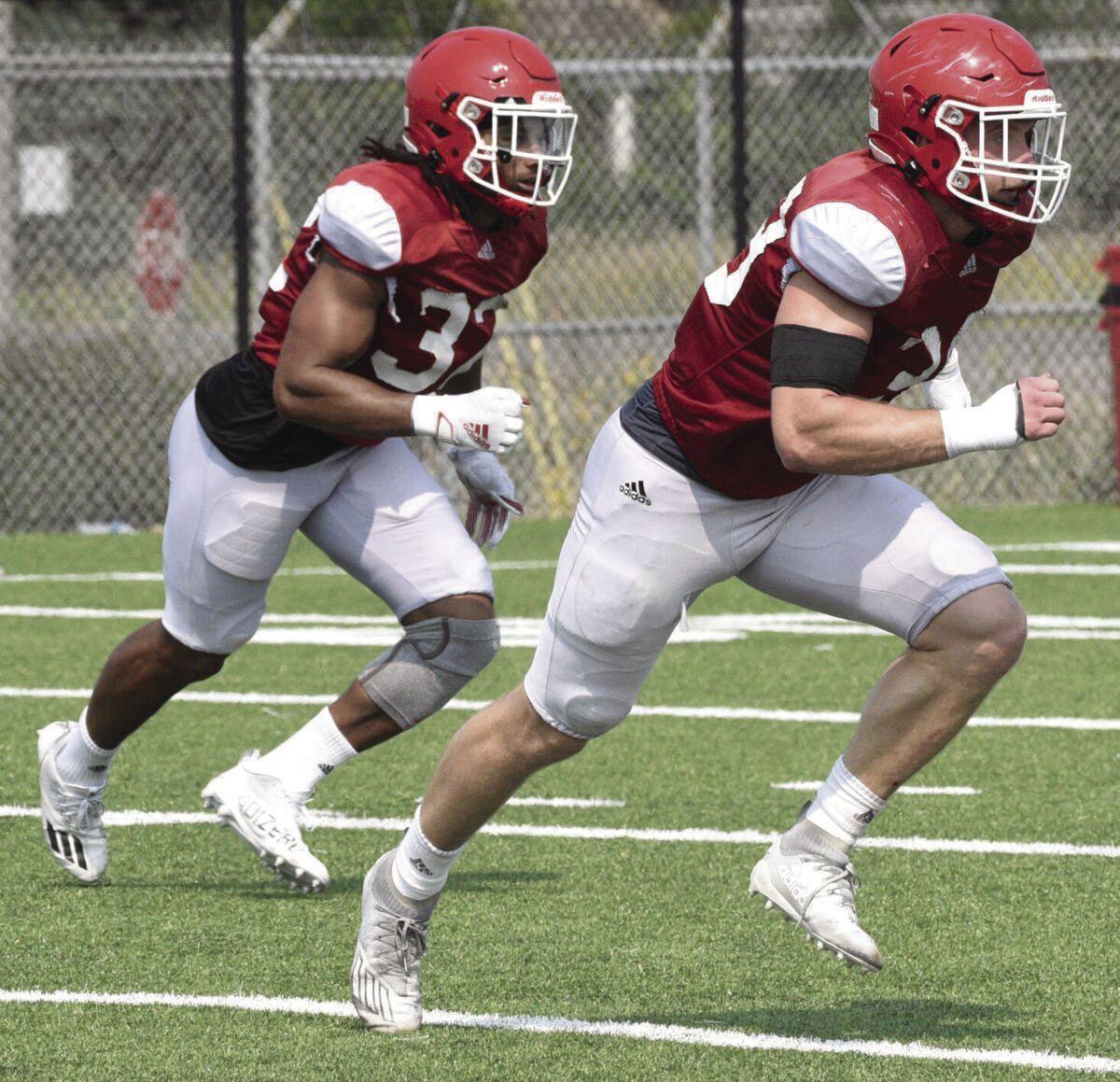 Jack Cochrane, right, and Tre Thomas pursue the play during a drill at the University of South Dakota's football practice on Tuesday, Aug. 10. 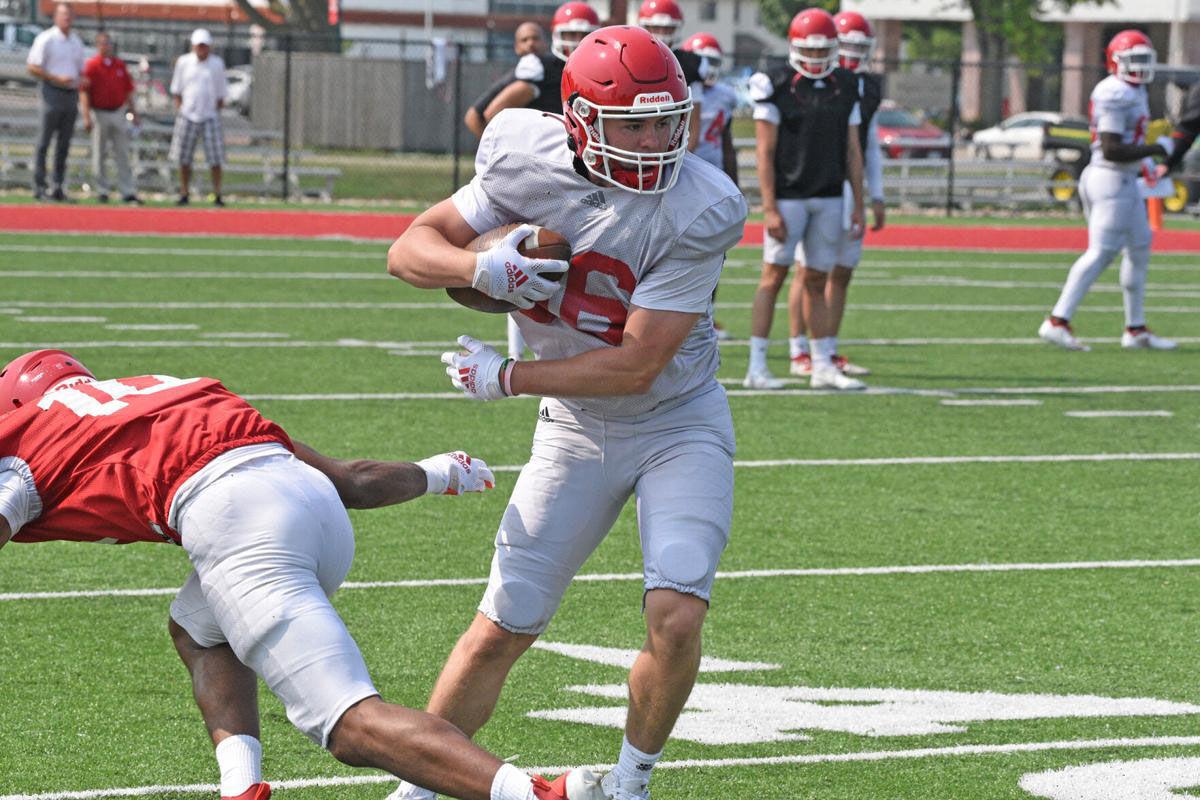 Kayden Verley avoids a defender after making a catch during a drill at the University of South Dakota's football practice on Tuesday. 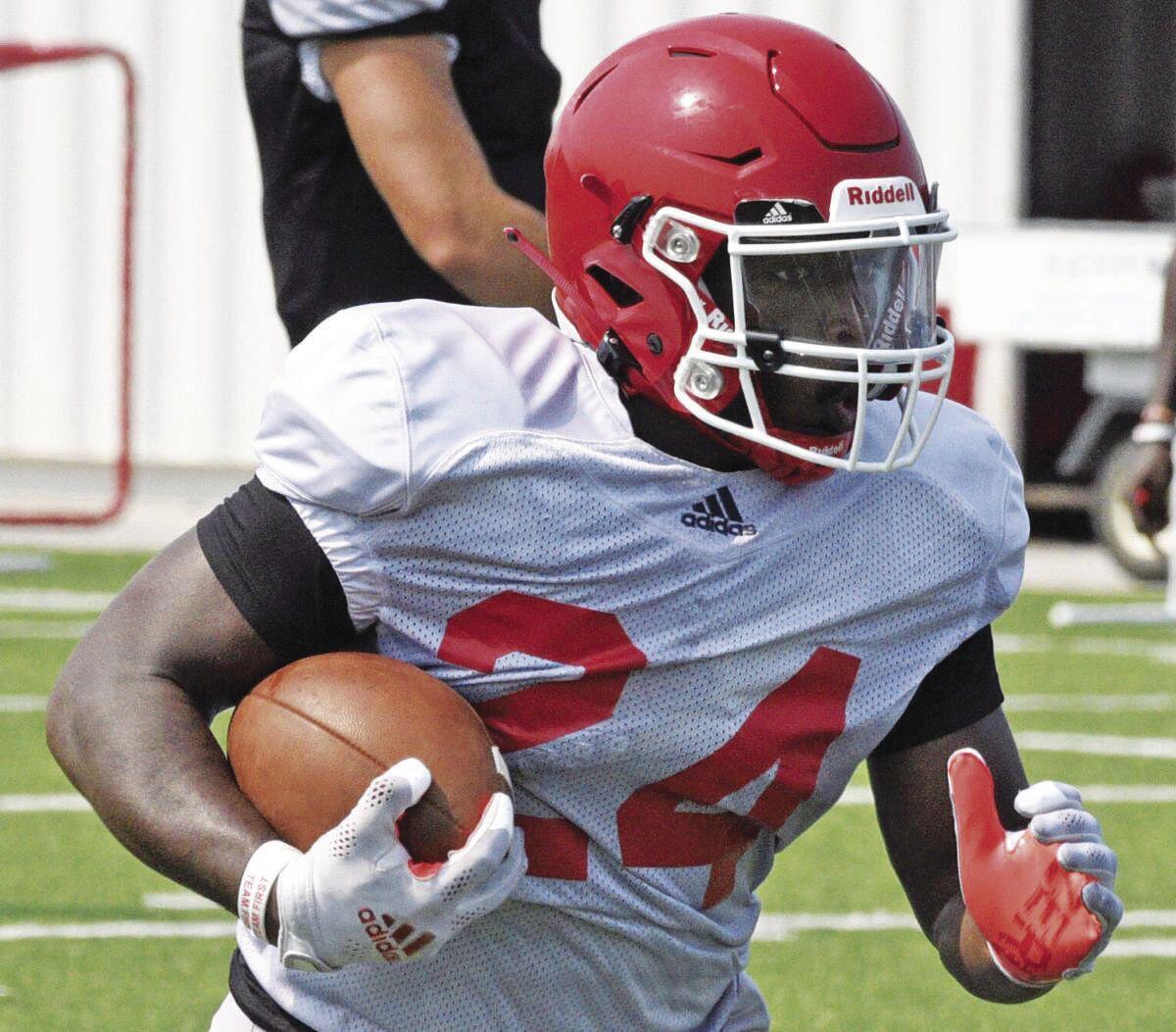 Running back Nate Thomas looks for running room during a drill at the University of South Dakota's football practice on Tuesday, Aug. 10.

Jack Cochrane, right, and Tre Thomas pursue the play during a drill at the University of South Dakota's football practice on Tuesday, Aug. 10.

Kayden Verley avoids a defender after making a catch during a drill at the University of South Dakota's football practice on Tuesday.

Running back Nate Thomas looks for running room during a drill at the University of South Dakota's football practice on Tuesday, Aug. 10.

VERMILLION — Stopping the run and making tackles is the focus of fall camp for the University of South Dakota defense, especially for the veteran linebacker core who will lead the defense this season.

“I think we’ve really been focusing on tackling and stopping the run,” sophomore linebacker Brock Mogensen said. “That’s going to be our big thing this year as a defense, is to stop the run, attack the ball, run to the ball and get turnovers.”

The linebacker group is led by senior Jack Cochrane, an academic All-American and three time captain for the Coyotes. Cochrane is joined by all-conference inside linebacker Brock Mogensen and returning starters Jakari Starling and Jacob Matthew.

“If you’re going to have an experienced group on defense, the linebacker group is the right group to have it because of the overlap in pass coverage as well as in defending the run game,” Coyote head football coach Bob Nielsen said. “They are a group that is going to push everybody on our defensive unit because that group, they are the guys that are the first in the weight room, the last out, the first on the practice field and the last off every day.”

Nielsen said the Missouri Valley Football Conference has seen more teams become run-first in recent years, and the emphasis for the linebackers and safeties has been to be able to stop the running game without sacrificing the passing game.

“It’s become a league where you have to get multiple people involved in defending the run with heavier formations,” Nielsen said. “Your linebackers and safeties have to be the run defenders, and if they’re not, it’s going to be a tough year for you.”

The Coyotes are coming off a 1-3 spring season with four games canceled due to COVID-19 and a frustrating on the field performance for the Coyotes. Cochrane said the spring season gave the defense more film to see where they can improve.

“Despite the frustration, the one thing the spring showed us is where we’re at,” Cochrane said. “It showed us a couple ways we can alter our scheme, and also showed us where we’re at fundamentally, blocking and tackling from a defensive perspective.”

For the linebackers, especially Cochrane and Mogensen on the inside, they try to be the leaders of the defense, knowing where everyone needs to be to execute the play at the best level.

“We try and know everybody’s position to tell them what to do and try to know what we are doing first of all,” Mogensen said. “I think we’re growing, we have a lot of young guys coming up that are really good and all of us are really smart players.”

While all four starters return for the linebacker positions, the development of some of the younger guys behind those starters has been huge according to Cochrane.

“It’s insane how much growth there has been from last fall, last winter and last spring to now,” Cochrane said. “Fundamentally, seeing our younger guys grow up and improve and become physical ballplayers, it’s been really fun to see that development.”

As a team, the Coyotes goals are sky high as always, but defensively, the focus on making stops is pivotal.

“On defense, you have to get off blocks and make tackles,” Cochrane said. “Our coaching staff’s amazing and they’re incredible. But, they can drop any play they want and it’s not going to make a difference if you can’t get off blocks and make tackles. Being really detailed and focused on the fundamentals, it’s going to put you in a good spot no matter what the defensive plan is.”